There are few tracking challenges as burdened with lore and conflicting information as how to tell a buck from doe. Some common methods I’ve heard suggest that bucks show dewclaws, or drag their feet, others say that buck tracks tend to splay more, and one frequently repeated method states that buck hind tracks tend land to the inside of the front tracks (due to the narrower hips in males than females).

None of these methods have worked in my experience. Dewclaws register in soft substrates or when an animal is moving fast, drag marks also tend to be a result of deep snow or sand, splay is also a result of speed and substrate, and the placement of the hind tracks has more to do with the direction the animal is looking and how it’s moving than the width of its hips. 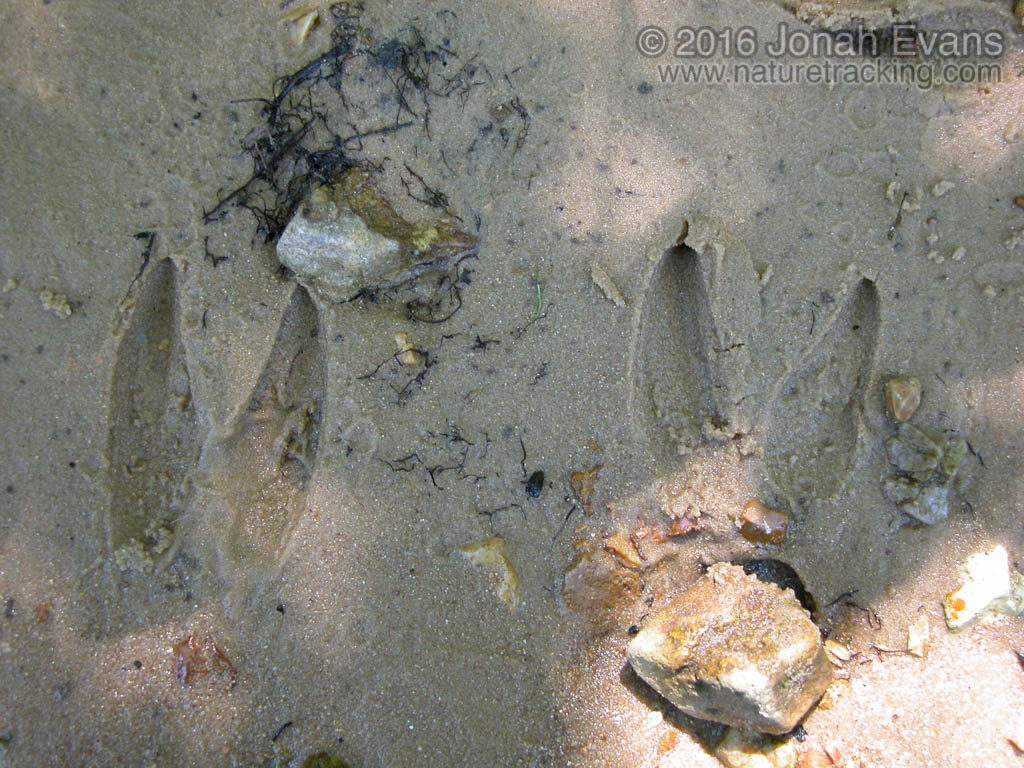 While it’s probable that early hunter/gather trackers developed methods to tell bucks from does, these skills have largely been lost. It wasn’t until a modern wave of obsessed North American trackers began sharing their experiences and knowledge gained from trackers around the world, that they began to understand how to reliably differentiate sex in deer.

Additionally, the rise of many expert trailers (experts in the art of finding animals by following their tracks; click here to see a list of certified trailers), enabled trackers to test these methods by examining a set of tracks, trying to determine the sex, and then finding the animal to confirm. During the last decade, these trackers have tested a wide variety of methods and adapted them for deer and elk in North America. Rather than write down my understanding of how it’s done, I decided to interview some of the best trailers I know and share their tips with you here: 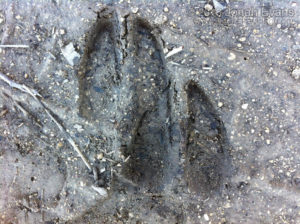 Brian is a hunter, tracker, and ultra runner from the Pacific Northwest. He was one of the first CyberTracker trailing evaluators and is widely considered one of the top trailers in the country.

“For deer, elk, and pretty much anything else with a hoof, the front feet are proportionally larger than the hinds on mature bucks– though this breaks down with younger animals. In deer, doe front tracks are usually equal or up to 3/16” longer than hind tracks. Usually, if it’s more than 1/4” larger and the tracks seems large compared to the average track in the region, there is about a 90% chance its a buck.”

Brian said that mature buck tracks are really distinctive and he can’t remember ever following what he thought was a buck that later turned out to be a doe.

“I have followed what I thought was a doe that turned out to be a yearling buck. Behavior and context are really important clues. If the animal is alone, it may be more likely to be a buck. After the rut, the bucks tend to hang out in really thick, dense terrain. Buck bedding sites also tend to be very hard to approach when compared to doe beds.”

Preston is an energetic and passionate tracker and hunter currently living in California. When he’s not following a deer, elk, or bear trail, he’s busy with his day job as a wildlife biologist.

“Get to know the deer in your specific area. Tracks of mature bucks (over 3 years old) are larger than doe tracks and are often obvious just by size. Younger males (1-2 years) are more difficult to tell apart. Bucks also seem to plow through the land and push through brush, while does tend to go around. Bed sites from bucks are usually found in more secure locations such as thick brush or hollow trees.”

“I measure track width just in front of the halfway point in the track and compare same side of body. Use clear tracks for measuring that are not on top of each other. Doe hind feet often will fill their front tracks, bucks often appear to do a very slight understep due to the hind foot being shorter.”

He also stressed the importance of determining if an animal is alone, and the value of watching deer in your area.

“You cannot look at 50 feet of trail and make a determination if the animal is alone or with a group. You have to follow the trail for a while to be sure of herd demography; sometimes yearling does, does who lost their fawns, or does lower in social hierarchy will travel on the fringe of the herd, and they may appear to be alone for a while, but will join up with the herd, then break away again. It’s important to follow the trail long enough to make a good decision.”

“Watching animals is critical to learning tracking. If you see bucks or does, go look at their tracks, you will quickly learn to group sizes of tracks. Secondly, watching animals will teach you about herd demographics as it relates to season and behavior. A strong foundation, especially a first hand understanding, will greatly aid the tracker in their ability to determine what deer are in groups and what deer are alone at different times of the year.”

Casey is a Senior Tracker and Evaluator with CyberTracker. He is co-author of Bird Feathers, and one of the only full-time professional trackers in the country.

“I rarely look at size difference between front and hind tracks unless it’s a tricky track. I prefer to look for a general size of tracks for does and young bucks in an area and the large bucks tend to stand out. Mature buck tracks just tend to be much larger. I also look for groups of deer. Does are often with mixed age groups. During the rut, a buck will hang around the does and followers. When I do measure tracks, I measure both length and width. Front tracks in buck are proportionally much larger than their hinds. Buck beds can be fairly easy to tell from doe beds, they are often larger, deeper and used more repeatedly.” 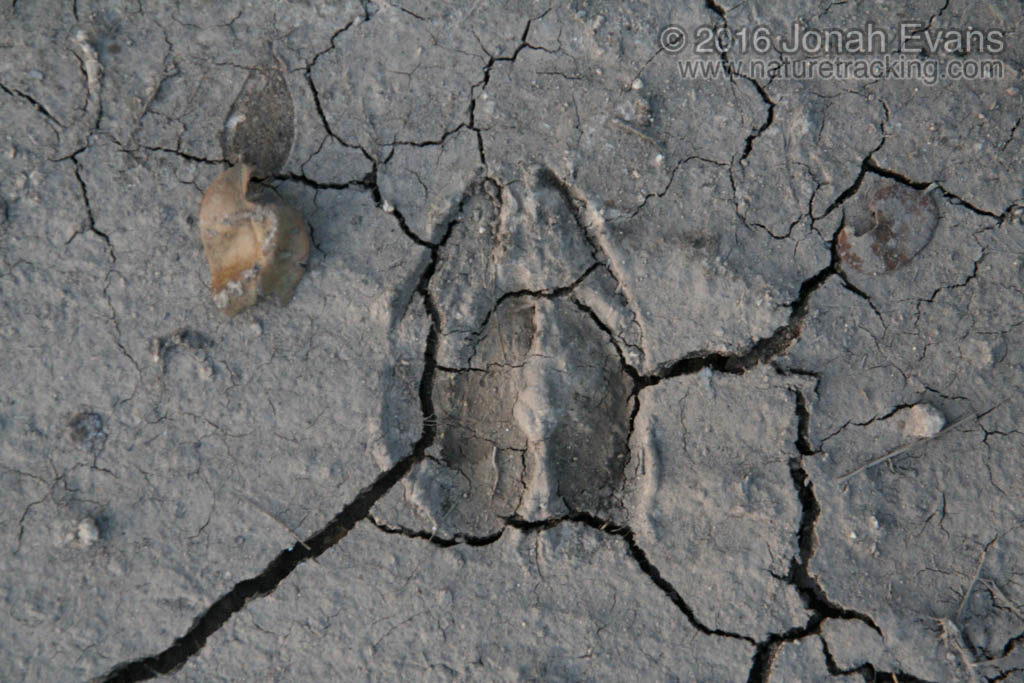 A larger front track (above) of a white-tailed deer is stepped on by a smaller hind track.

To recap, the basic idea is that bucks tend to have proportionally larger front versus hind feet than does. Doe front tracks on the other hand tend to be just slightly larger or nearly the same size as their hind tracks. One theory is that this is due to the proportionally greater weight in front tracks of bucks as a result of their more muscular front ends and antlers. The top trackers will measure either lengths or the widths to compare the tracks. Additionally, mature buck tracks tend to be larger than doe tracks, though due to the size variation in deer from region to region, there is no universal size cutoff and you must learn the sizes in your area.

Behavior and context are also valuable clues, but must be taken together with all the clues available to form a complete picture. If you find a large deer track, the front is quite a bit larger than the hind, and the animal is traveling alone through dense vegetation, it’s most likely a buck. Keep in mind that juvenile males can be easily mistaken for does and it’s best to reframe the question from “Is it a buck or doe?” to “Is it a mature buck or a doe/juvenile male?”

Hopefully this will inspire you to take a closer look at the deer tracks in your area. I’d be interested to hear your experiences. Do these techniques work for you? Are there other tricks you’ve found useful?

Posted On August 20, 2014 ~ 10 Comments
Researchers often use scat (feces) counts as a way to determine abundance of various species. The basic idea is that if you know the rate…

The Most Used Mammal Book on my Shelf

Posted On June 2, 2015 ~ 2 Comments
I'm a bit of a junkie for good field guides and people often ask about my favorites. I love my Peterson Guide to Mammals of…