Click on any of the links below to view 1000’s photos of each type of animal track category. The query tools on these pages will assist you in learning how to identify many different types of animal tracks. 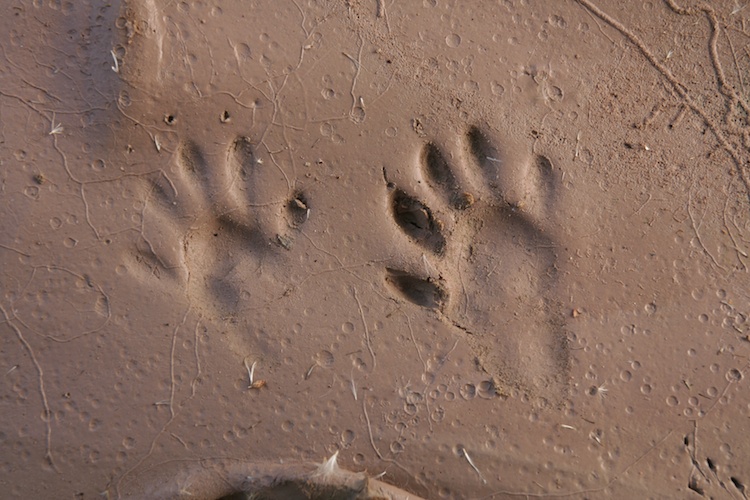 Tracking is essentially learning a new language. A birdwatcher begins by learning to identify the picture perfect male bird in breeding plumage. Over time and with some experience, it becomes possible to identify a bird with subtler clues. After years of birding experience, the expert birder can identify a bird by a distant call note or a mere flash of color. Learning to track works the same way. At first you will need clear prints in order to make a positive identification. Eventually, with some time and practice, you will be identifying wind blown tracks in sand and even those on hard surfaces by only the toenail scratches.

As in learning any complex subject, you must start at the beginning by identifying clear prints on easy surfaces. This creates “search images” that will be etched in your memory. Expand these search images by following a set of clear prints to a place where they become obscure. Then, ask yourself how you can tell that it is from the same animal?

It is easy to make mistakes when tracking and every good tracker has made their fair share. Be flexible in your interpretations. Look for the identifying characteristics in the track rather than immediately rushing to identify it. I recommend making a list of the top 2-3 species you think could have made the track and then considering them each objectively. Usually, when beginners suspect a track is from a really rare or exotic species, it’s just a weird track of a common species. Carefully considering the obvious species and being flexible in your interpretations will help you avoid some common mistakes and make you a better tracker. 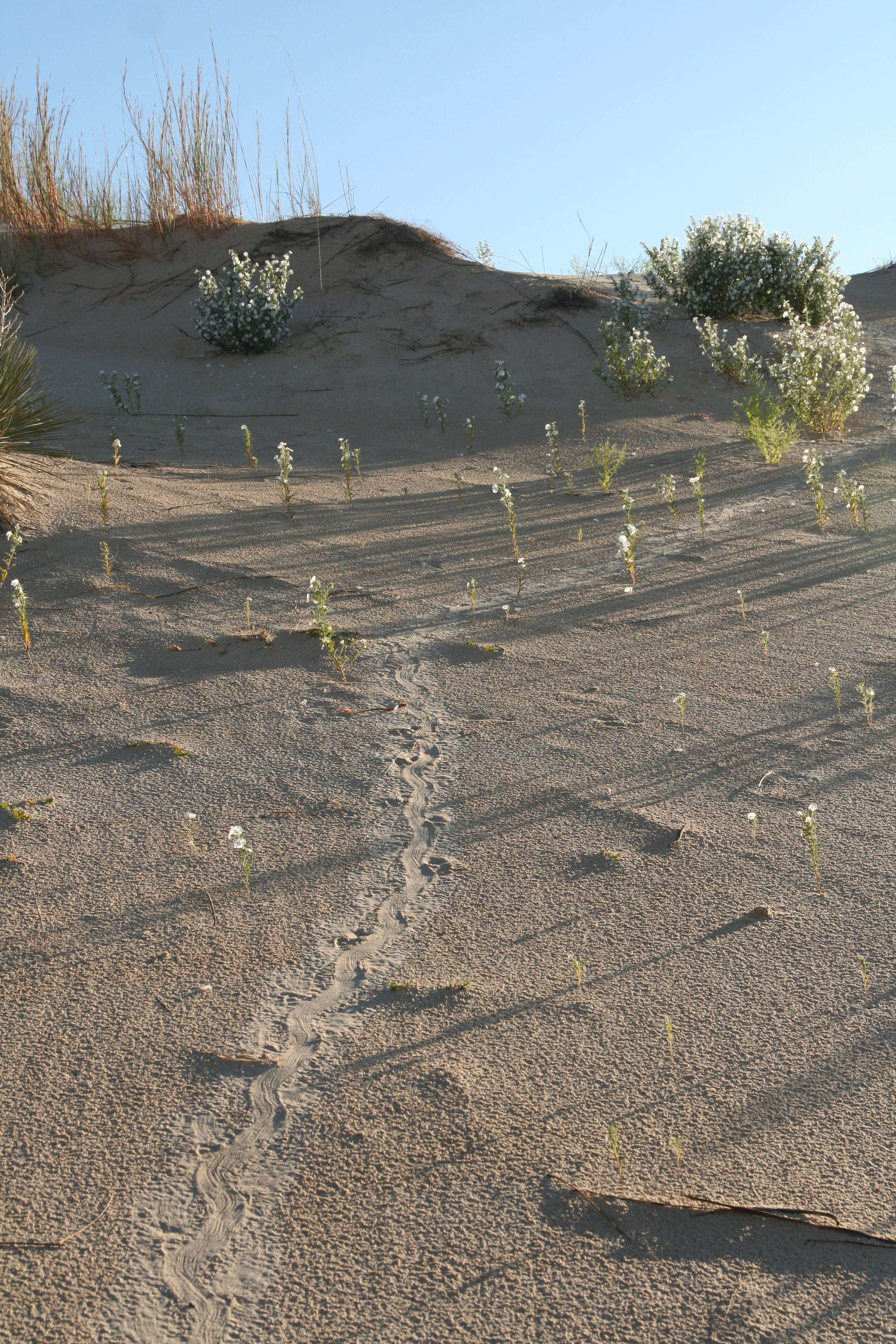 The more you practice, the better you’ll get. I frequently veer from my path to inspect a little mud puddle or dusty area. You don’t need to wait for a tracking trip to practice. Walking through a neighborhood can be a great tracking adventure if you remember to keep looking for tracks.

There are some amazing places to see animal tracks. Visiting these places will offer you the chance to increase your knowledge of tracking by leaps and bounds. Exploring beaches, deserts, and other sandy or muddy places with clear tracks that you can follow is a quick way to expose yourself to the large amount of variation that exists in tracks. Bridges are particularly good because not only are the tracks protected from the weather, but they often serve as corridors for wildlife, drawing numerous species into a small area. Visiting good tracking spots is an important key to learning how to track in areas where tracks are not as clear and easy to see.

Felines, canines, and rabbits all show four toes on both the front and hind feet. Knowing this can help you eliminate many of the other possibilities very quickly. Some animals, mostly rodents, show four toes on the front feet and five on the hind. The ability to tell between front and hind feet is critical to being able to know who the animal is and how it was moving.

Be careful when counting toes!!! Look closely and try to find other tracks from the same animal to help verify what you’re seeing. It is very common for an animal’s hind foot to land in the front track. This can result in a track that may look very strange if you are not aware that it is actually two tracks. Some animals such as raccoons, which usually show five toe’s will occasionally only register four and leave tracks that resemble other species. Also observe the shape of the toes. Are they long fingers or round pads?

Is the track symmetrical?

Draw an imaginary line through the middle of a track and compare the left and right sides. The symmetry of a track can aid in identification as well as be useful in determining front feet from hind and left from right. Felines have very asymmetrical front feet while their hind feet are much more even and symmetrical. Rabbits also make asymmetrical tracks. In contrast, canines usually leave tracks that are very symmetrical.

What is the shape of the metacarpal or palm pad?

Many animals, such as rats, mice, and squirrels have palm pads that are made up of several distinct metacarpal pads. Others, such as canines, felines and raccoons, have metacarpal pads that have completely fused together into one palm pad. There are also distinctive features on the palm pads of some species that are very helpful for identification. For example, feline species all have a double lobe on the anterior end of their palm pad.

Are there signs of hair in the track?

Hair covers the feet of many species and is often visible in the track. It can leave a distinct imprint in mud or it can just obscure the track in sand and dust. Hair may also register in a track by increasing the negative space between the toes. Rabbits, kangaroo rats., red foxes, long-tailed weasels, and southern flying squirrels all show significant hair in their tracks.

Is there webbing between the toes?

Webbing is a valuable indicator of species such as the river otter, beaver, and American alligator. However, it is the most valuable in the identification of bird species. Look carefully for signs of webbing in tracks. It can be misleading when the webbing doesn’t show. In the webbed feet of birds, toes two and four slightly curve toward toe three.

Tracks vary considerably due to the speed of the animal, the composition and depth of the substrate, the moisture level in the substrate, any vegetation or rocks in the track, and the effects of wind, rain, and sun on the track. Learning how to identify the incredible variations of tracks is one of the great challenges in tracking.

One of the joys of animal tracking is that it is complex and always challenges you to look deeper into nature’s mysteries. The following tools for learning tracking will help you organize your thoughts and get the most from your experiences.

1) Photography: Aside from being a great way to document your observations, photographs allow you to go back and make further observations from the comfort of your home. It is not uncommon for a tracker to go home after analyzing a track in the field and realize that they didn’t take note of an important detail. Additionally, you can share photographs with other trackers to get their thoughts.

2) Journaling: In your journal, take note of where you are finding tracks from different species and document any behaviors or patterns you observe. Draw tracks in your journal whenever you can. Learning to distinguish between similar species such as domestic dogs and coyotes requires an eye for detail and an ability to see subtle spatial relationships. Careful drawing will substantially increase your ability to see these relationships more accurately. After drawing a track, take some basic measurements as well as notes on the environment surrounding your track.

3) Nature Videos: Animals are very challenging to observe in the wild, so don’t hesitate to take advantage of what modern media offers for wildlife lovers. Watching nature shows and movies can help you to better understand the mechanics of how an animal moves their body and the common behaviors of different species.

4) Trail Cameras: The price for a low-end digital trail camera has dropped significantly in recent years. For under $100, it is possible to purchase a decent camera that can be strapped to a tree and will take photos or videos when an animal walks by. Trail cameras are a great tool for confirming which animals are present in an area and who may be responsible for a particular sign.

Using these tools will help you learn tracking much faster. Remember to resist the temptation to jump to conclusions about the tracks and sign you find. By remaining flexible and somewhat skeptical, you will become a much better tracker.