Published on January 15, 2016 under Articles

While tracking in the snow can be fantastically easy, it can also be deceptively tricky. Everything you know about tracks gets upended when the tracks are hidden at the bottom of deep leg holes in deep snow. Additionally, tracks can become distorted and expand dramatically as snow melts. In deep, melted snow I’ve actually seen people mistake squirrel tracks for those of a bear!

While trackers usually depend upon the details in each track (like the number and shape of the toes or the presence of claws) to make identifications, in snow it is often necessary to look for other clues. Gait patterns are one of the best tools to ID tracks in the snow and some species are easily recognized from a distance simply by the pattern of tracks. Researchers have even conducted wildlife surveys in snow by identifying the tracks of larger animals from small airplanes!

The best way to get started with tracking in the snow is to first learn the most common species you’re likely to encounter. Here are 5 that seem to be in everyone’s backyard:

Rabbit tracks are one of the most commonly seen after a snow. Look for the repeating bound patterns. Each group of 4 tracks tends to form a tall, thin rectangle. Squirrel bound patterns tend to be much more blocky. Rabbits also have small round toes and fur covered feet while squirrels have long fingers. 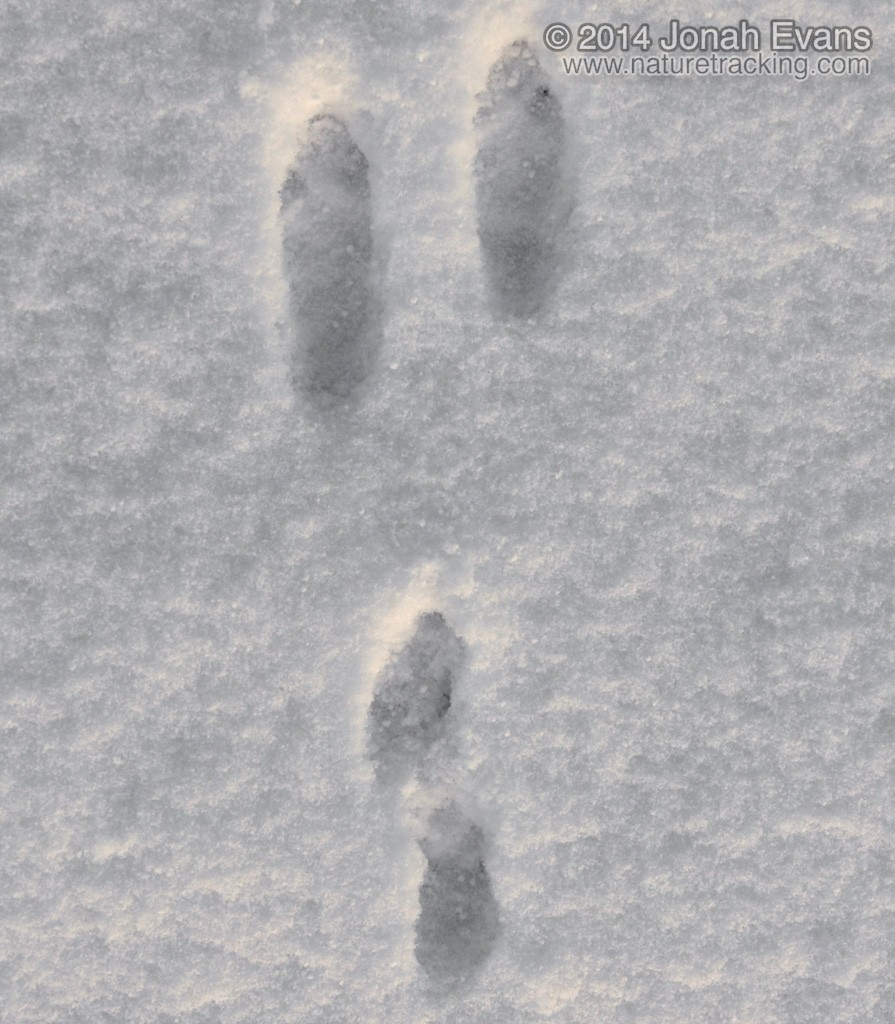 A cottontail bound pattern. The hind feet are at the top and the fronts are at the bottom. 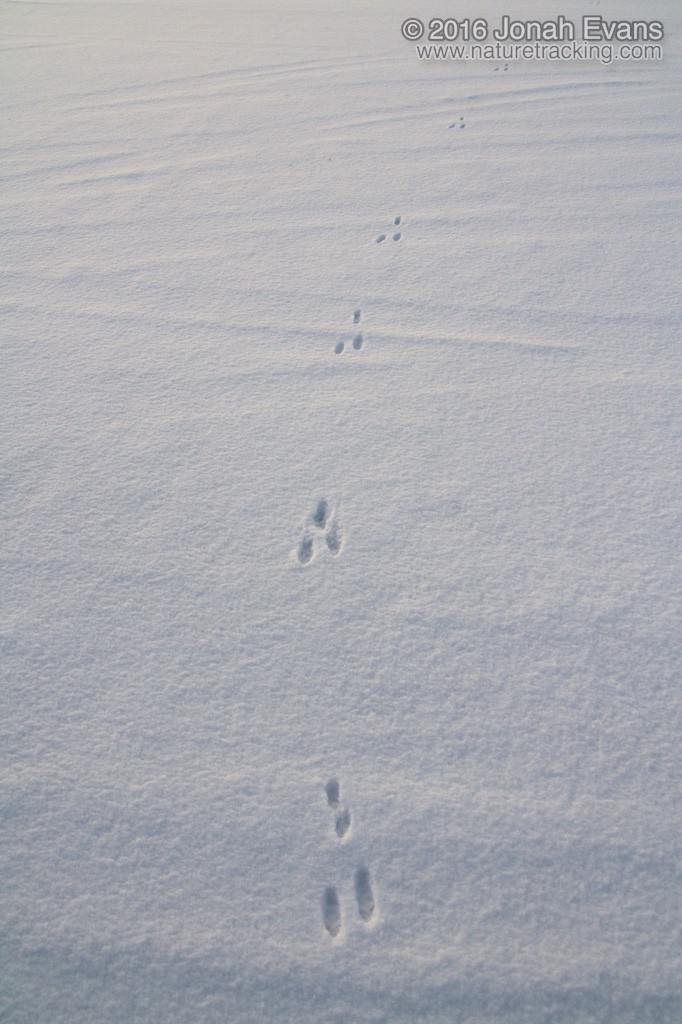 A cottontail bounds toward the camera. 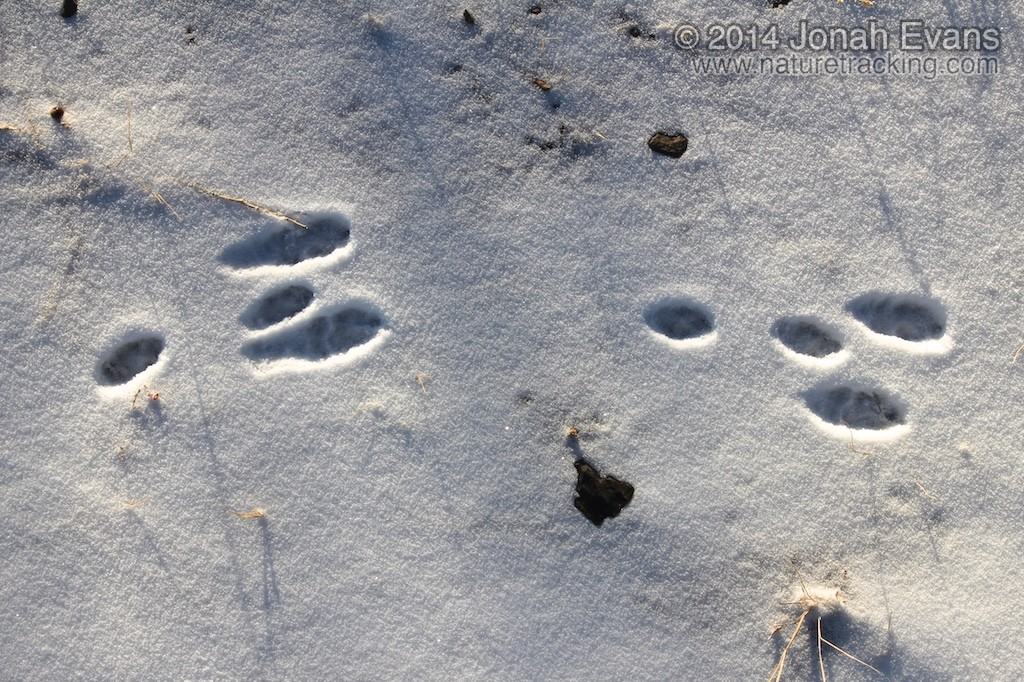 A cottontail bounding to the right.

Squirrels have a wide and blocky bounding pattern when compared to rabbits. If tracks are clear you may see the long skinny toes. Follow their tracks and they will eventually lead to a tree or other structure for them to climb. 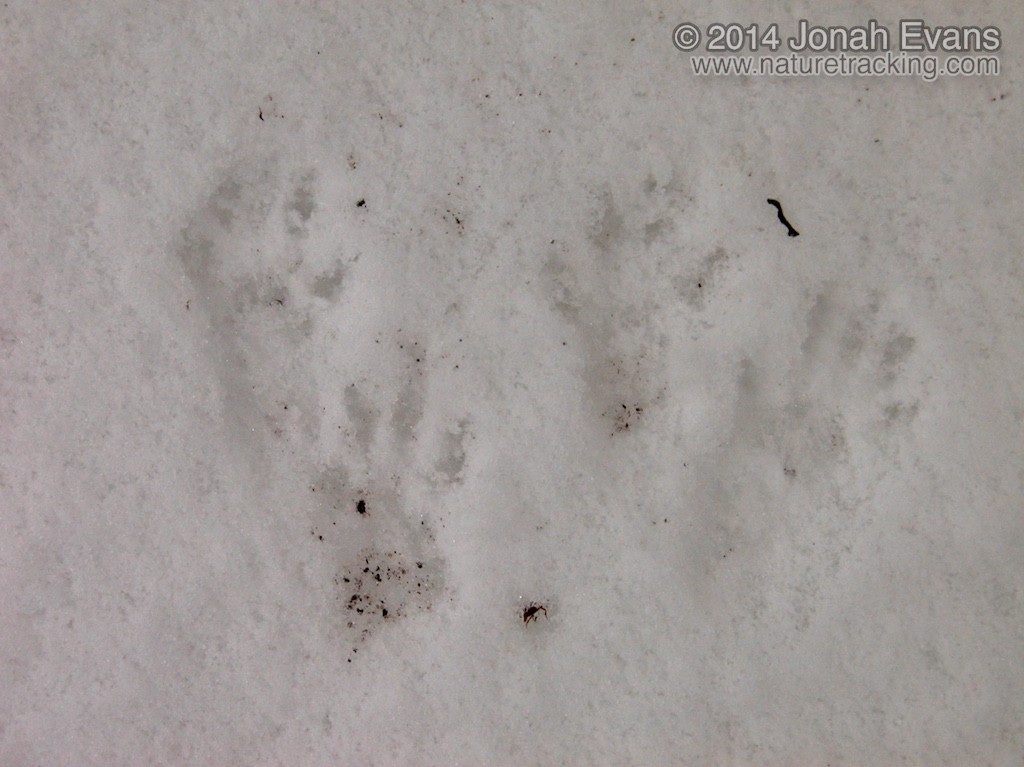 Red squirrel tracks in snow. The 5-toes hind feet are to the outsides and the 4-toed front feet are on the inside. 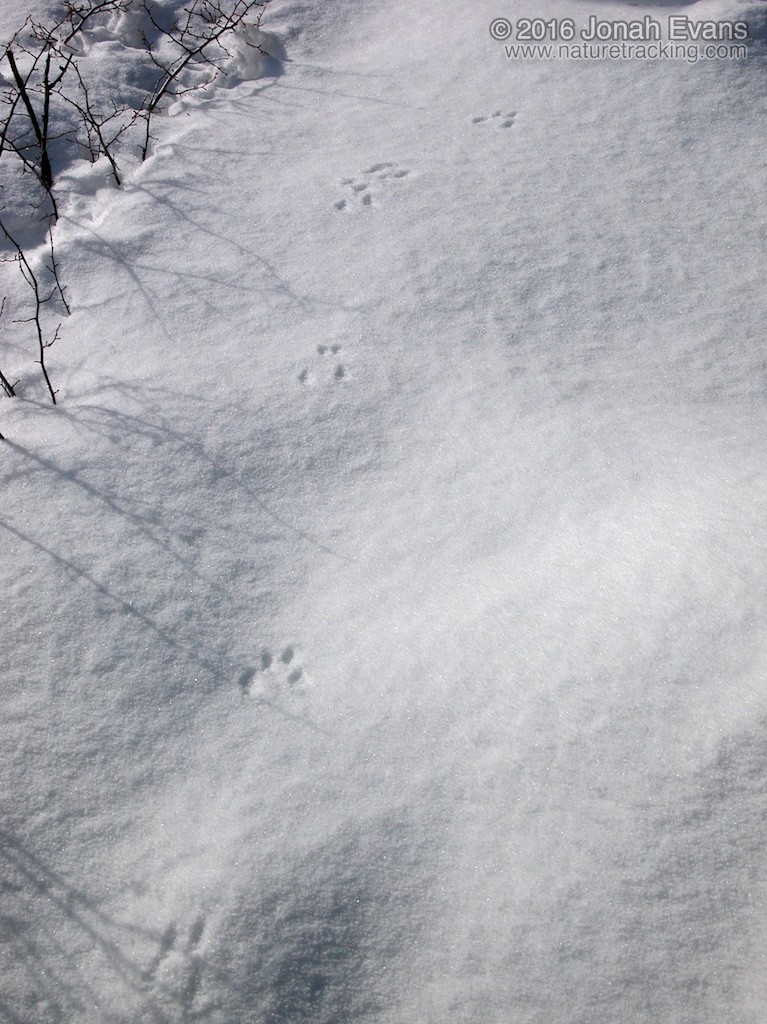 The blocky bounding pattern of a red squirrel in snow heading toward the camera. 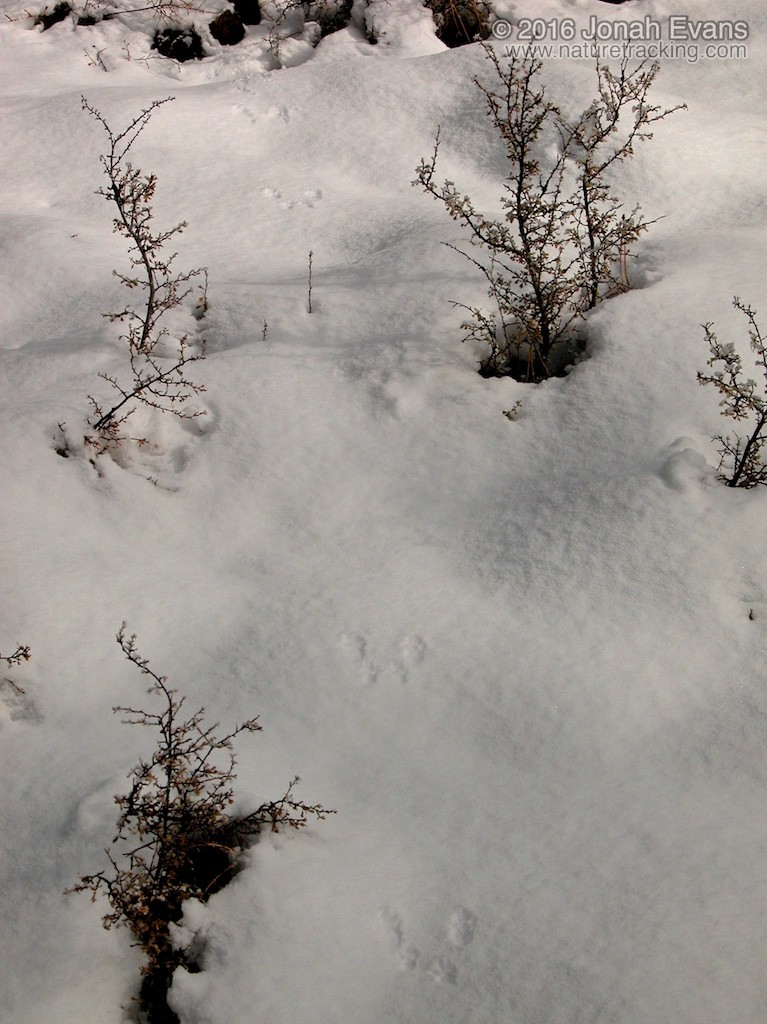 Tracks of a western gray squirrel bounding away.

House cats are everywhere. I’ve seen their tracks in places surprisingly far from people. They have 4 toes on their front and hind feet and tend to direct register walk (hind feet landing in the front tracks) when walking in snow. 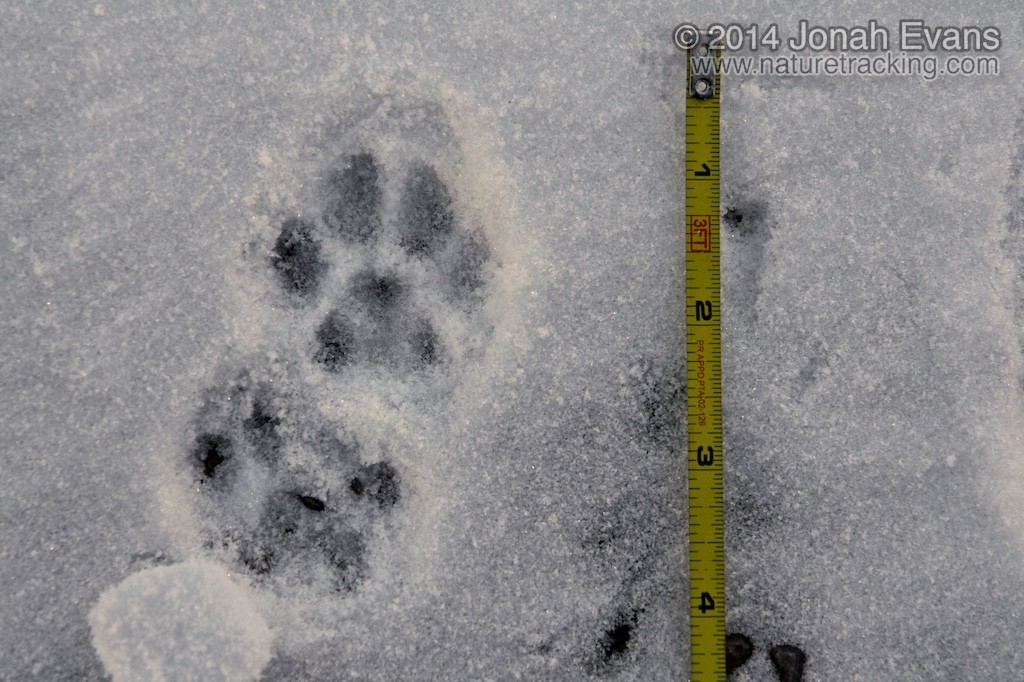 House cat tracks in snow. The right front foot (below) was stepped on by the right hind. 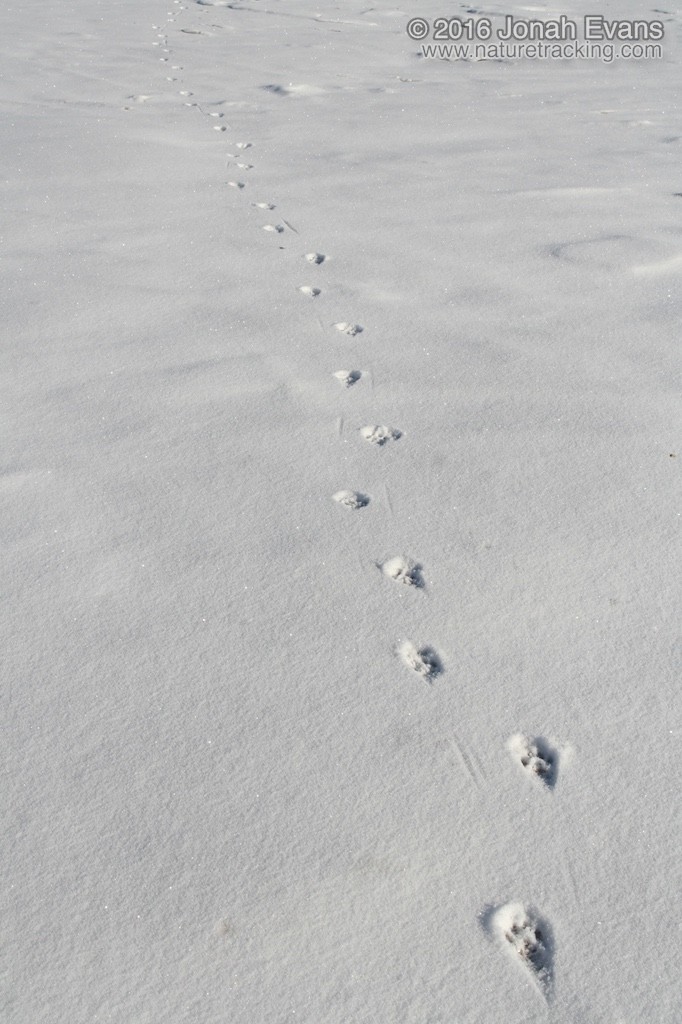 The zigzagging tracks of a house cat walking away. 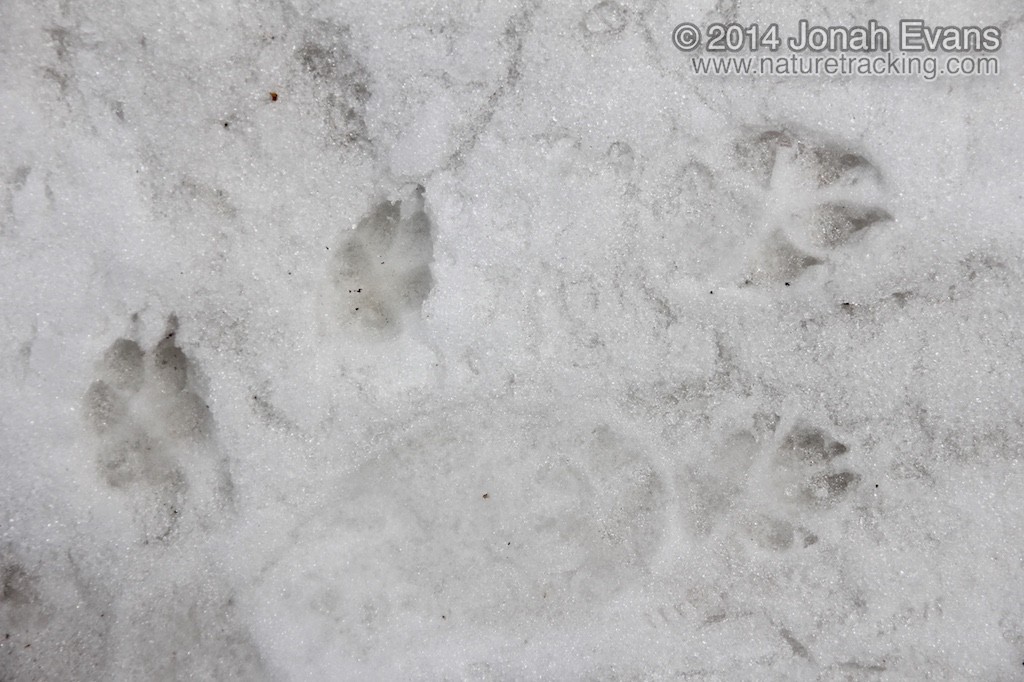 Tracks of a coyote (on left) and a domestic dog on right.

A dog galloping in snow. Note that the claws don’t always show in dog tracks. Tracks from right to left are: LF, RF, LH, RH.

Deer tracks are usually easy to identify. However, their hind feet tend to step on top of their front tracks leaving distorted and confusing marks. In deep snow even deer tracks can be tough to identify. 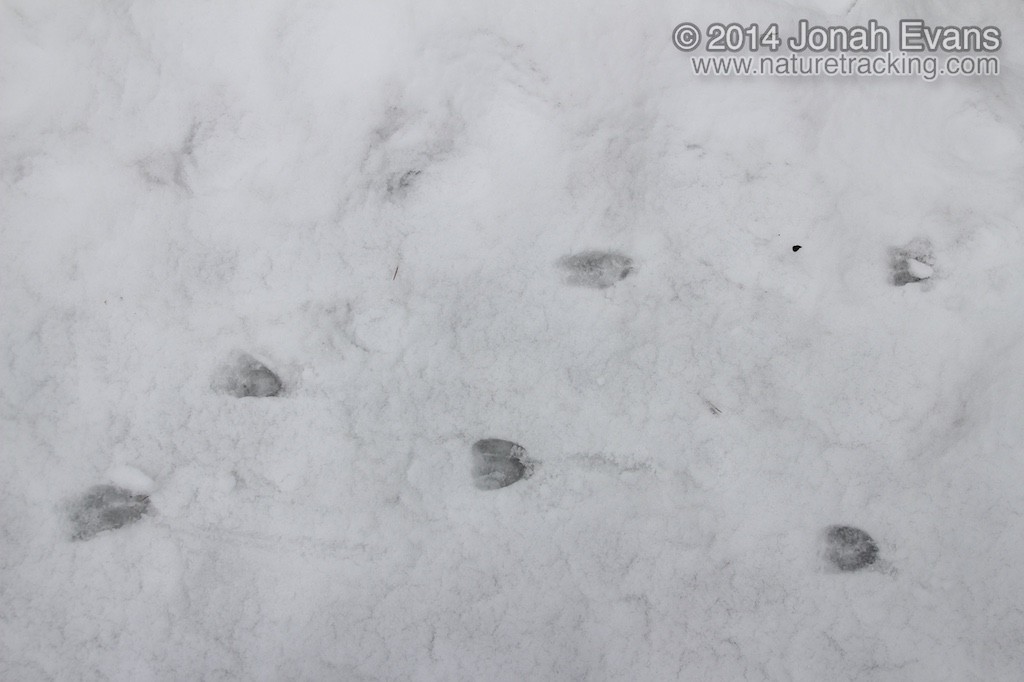 Heart-shaped deer tracks in snow headed to the right. 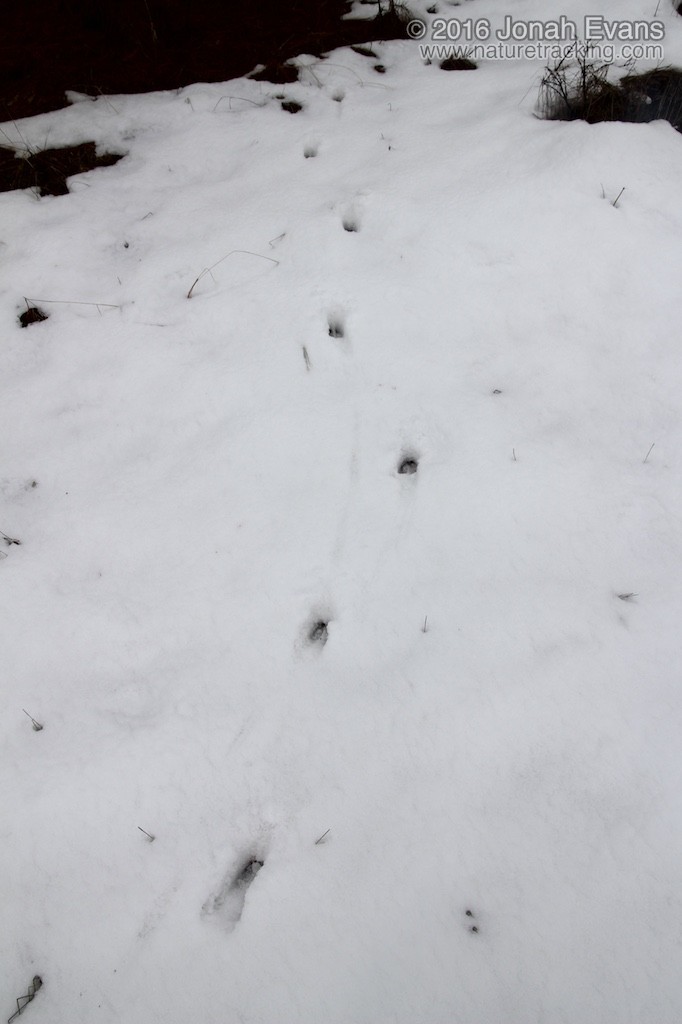 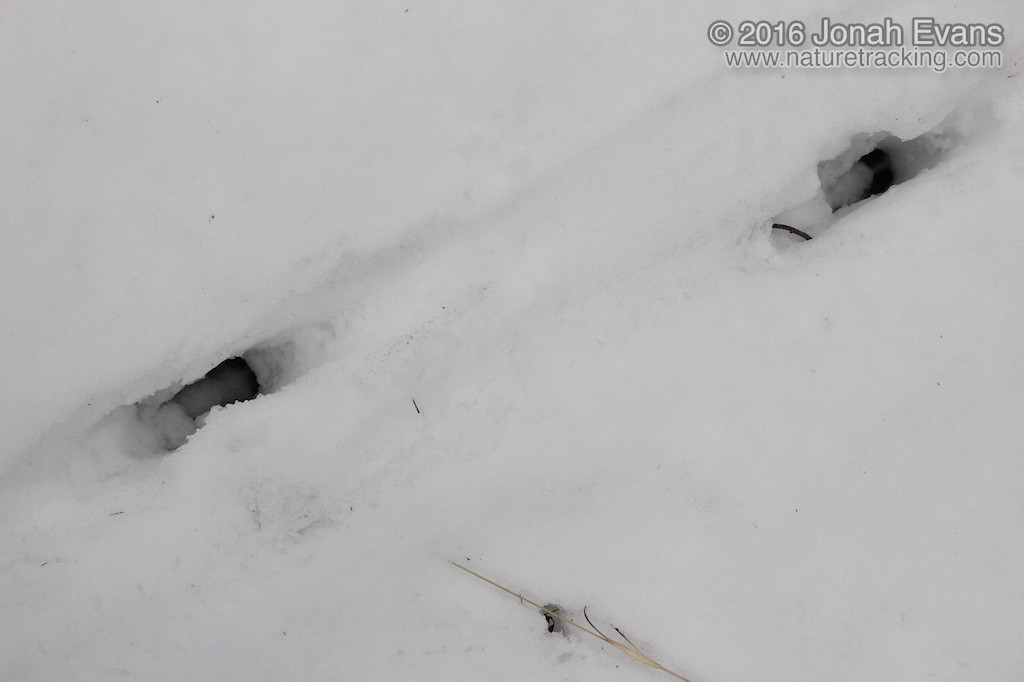 Hopefully this gets you started. Other common backyard species include gray fox, red fox, raccoon, opossum, and mice. Enjoy the snow!

Posted On July 28, 2016 ~ 8 Comments
There are few tracking challenges as burdened with lore and conflicting information as how to tell a buck from doe. Some common methods I've heard suggest that bucks show dewclaws,…

Posted On October 22, 2020 ~ 0 Comments
This is a 40 min introduction to animal tracking presentation I've given many times. Due to the pandemic and our inability to gather in groups…