The following guest post was written by my friend Preston Taylor. Preston is certified as a Senior Tracker and is very passionate about trailing, hunting, and finding wildlife. Go to Marble Mountain Adventures to learn more about what Preston is up to these days.

I was moving slowly along an elk’s trail, pausing between every softly placed boot sole to look ahead through brush and past tree trunks. Somewhere up ahead of me this elk was going to lie down, and I was closing in on him. I had already jumped him twice this morning. First out of a thicket of pine saplings as he fed on grass. Then I spooked him again out of a bed on top of a ridge. After the second time I sat down next to his bed and waited for 2 hours. This was to give him time to calm down, forget I was in pursuit, and bed again. 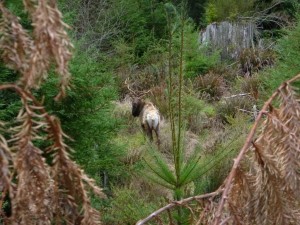 The end of the trail: a bull elk standing in his tracks.

Before taking up his trail I rubbed the urine-soaked dirt from around his bed on my shoes, pants, and backpack. It was going to be hard stalking into 10 yards from this yearling spike bull, but that’s how close I needed to get in order to take a shot from my longbow.

Now I crept along his trail, stopping constantly to probe ahead into the shadows with binoculars. The tracks were easy to see and merely suggested the direction he was moving, but the tracks could not tell me where he would stop. I was more concerned with seeing him first, so I oozed through the forest for a few hundred yards in this fashion. It was while paused to scan that I felt the cool breeze blow on the back of my neck. I could almost see my molecules of scent drift ahead into the woods.

In seconds the elk was bolting down the mountain. He exploded out of a bed 40 yards from me. Neither of us had seen each other, but all he needed was one whiff of my aroma to know I was on his trail. I did not pursue him again that day.

Start at the Beginning

As with any skill, trailing can only be learned through practice. Start with easy trails to develop good tracking habits. First you have to locate a tracking area where you can frequently find a trail you can follow. To begin, look on a map for parks and public land. Then do some research into where your local, big mammals reside. Learn to track on your biggest ungulate, whether that’s elk, moose, deer, wild boar, or an exotic species like oryx. After locating a place with access and animals, take a hike on the trails and get a look at the woods. Try following some tracks for 10-50 yards off the trail. Do this with a handful of tracks you cross as you transect the park. Once you have located a suitable trailing spot, then you can begin your practice.

It is rare to find a tracking spot with good substrate all year. For example, at a favorite State Park of mine, in the dry peninsular ranges of Southern California, the ground is mostly large-grain sand from the decomposed granite in the earth. Months of sunshine in the summer dry out a layer of dust on the ground, in which I am able to trail and find deer consistently. After a rain in the winter, the soil becomes soft clay and deer leave an easily followed trail. However, between rainstorms the ground turns to concrete and has no dust layer; at these times trailing is neither practical, nor possible. Substrate is a key factor in a tracker’s ability to follow a trail. 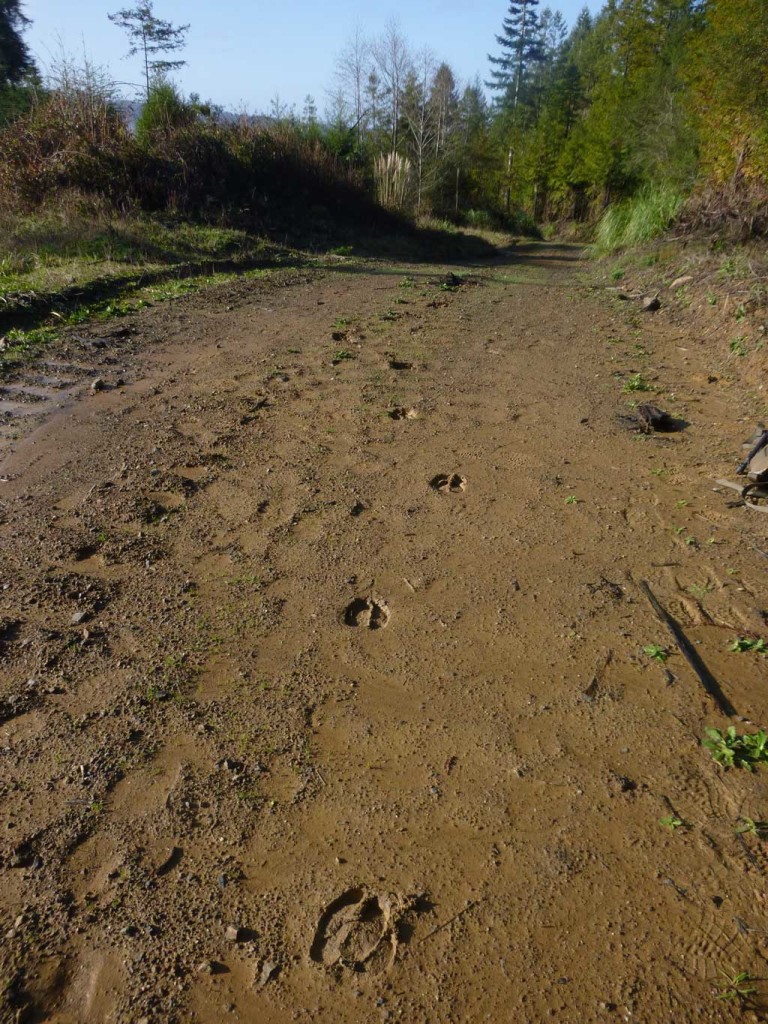 Every trail starts at the beginning: a track. Cut for sign until you find the right trail. These fresh, bull elk tracks begged to be followed.

Sometimes the most difficult challenge in a day of trailing can be whether or not to follow a set of tracks. Here is the easy answer: only follow fresh tracks. Fresh tracks are spoor less than a day old. Old sign gets dulled as it ages, and is then harder to see. Fresh trails give you a lot more feedback, which allows the tracker to move confidently on the trail.

However, you will have to learn to age sign. Again, start with easy trails. Go tracking the day after a hard rain, and it will be easy to identify the freshest spoor.

Now is the time to step off the dirt road and onto the trail of a wild animal. You have found a fresh trail and followed it to where the animal walked into the woods. Stand there and let your eyes adjust to the new substrate. Take the time to look at the details of the spoor so you can see them in the distance. With your eyes follow the line of tracks out as far as you can. When you are ready, begin following in the animal’s footprints.

Stand up straight with your head up and look for tracks in the distance. Move only as fast as you can see the trail up ahead. At first, this will result in a hesitant movement through the woods, but with practice you will see sign easier and quicker. Sign may be in the form of footprints, flagged plants, droppings, broken vegetation, splattered mud, and dug up earth to name a few.

The game is on. You can see tracks and sign on the land. Now work the trail. Trailing is a game of connect the dots. When I move on a trail, I see fresh sign in the distance and walk up to it, glancing down with my eyes to confirm it is the same animal I am tracking. As I walk, my eyes are shifting ahead looking for the next fresh sign, and I see it before I confirm the closer track. And you do this continually, naturally, without thinking about it. Pretty soon you realize you’ve built up a momentum and are walking smoothly down the trail.

Your practice should include an element of exercise training. Trailing is physically and mentally fatiguing, and I have seen talented trackers become disoriented from mental strain following a tough trail. Your stamina and skills should develop simultaneously. As you are able to move further distances on the trail, you will have the mental focus and muscle strength to find your way out of the woods. Your mental stamina is reflective of how difficult the trail is to follow and your current skill level. 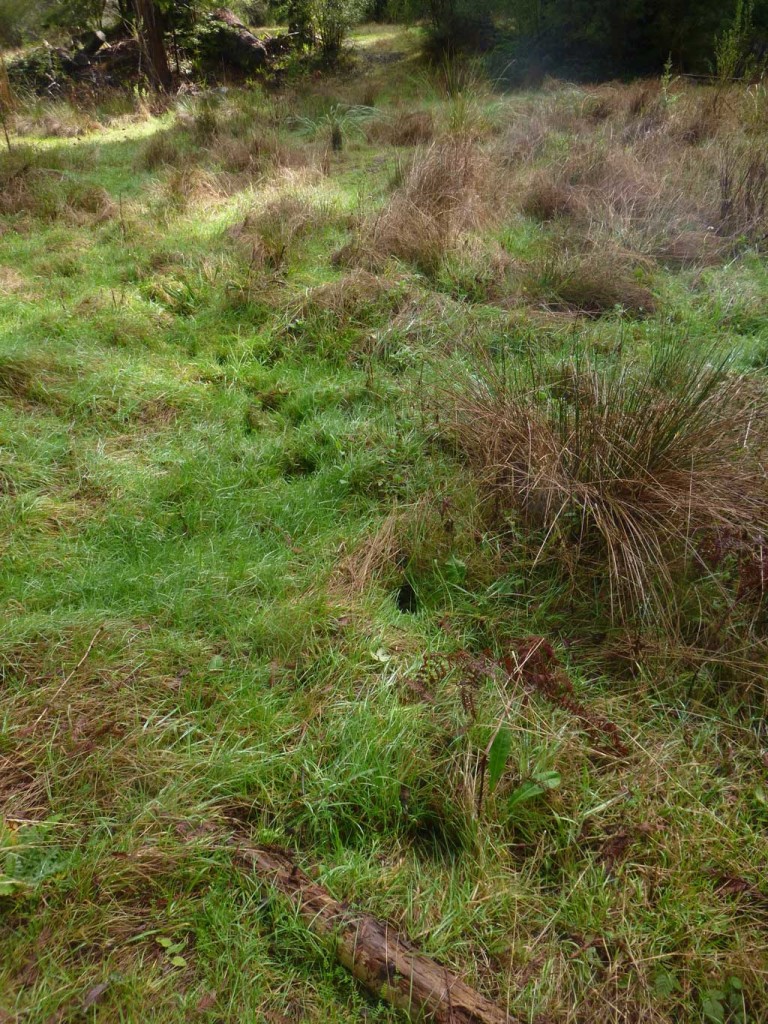 Seeing tracks off the road. Look at the pattern of this walking elk trail in damp grass. With the eye you can follow it from the center bottom of the photograph up into the top left corner.

Pushing your stamina is accomplished by setting goals at the start of a day trailing. Set an intention. Start with an achievable goal: Today I am going to hike until I find a very fresh deer track. And increase your goals as you get better: Stay on a trail for an hour; follow a trail until you lose and find the tracks 3 times; stay on the trail for 3 hours; and finally, I am going to trail an elk until I find the animal.

Never Forget About the Animal

With regular practice you can become proficient at following animal tracks. Remember, the ultimate goal is finding the animal. When you have enough practice with the mechanics of trailing, your brain can relax to focus on the task of spotting the animal. If you follow tracks for a distance, then you will start spooking animals. At this point trailing becomes a game of trying to predict where you will find your quarry.

Every hunter knows it is very difficult to stalk a deer on its bed, and trying to spot one while trailing is nearly as tough. Expect to be seen by the animal most of the time, but relish in those rare opportunities of spotting the game first. Observing an animal oblivious to your presence is a gift.

On a crisp and clear winter morning in the Cuyamaca Mountains of eastern San Diego County, Barry Martin and I went for a hike to look for rutting mule deer. It was a few days after a hard rain, and the sun had baked the ground hard. We could not cut any tracks along the fire road, so we decided to head off-trail and up the mountain to where I knew the bucks liked to spend the day.

On top of a saddle near the crest we crossed smoking fresh tracks. The deer’s hooves had broken through the hard crust and dark, damp earth was exposed in the tracks. There were a few trails going both directions on the saddle, so we chose to follow the deer moving into the wind.   The trail was easy to see, and in a short time we had tracked the deer down off the saddle to a hilltop and it looked like the deer had dropped into a bowl on the northeast side of the mountain.

Barry and I moved over to a cluster of boulders standing taller than the surrounding chaparral. We crawled up the backside of the rocks and peered down into the bowl. There were the deer! About 200 yards below us stood a doe and mature buck. The doe was trying to feed, and the buck was walking behind her smelling her rear end. The doe was not quite receptive and she used evasive tactics like walking through thick brush to give her some space from the buck. But the buck would eventually pursue her and catch up. The two deer circled around like this for 15 minutes, and Barry and I watched the show. Eventually the doe tired of the buck and she lay down. The buck turned and walked out of view. Barry and I also turned and walked home with a happy smile on our faces. It was a good day trailing. 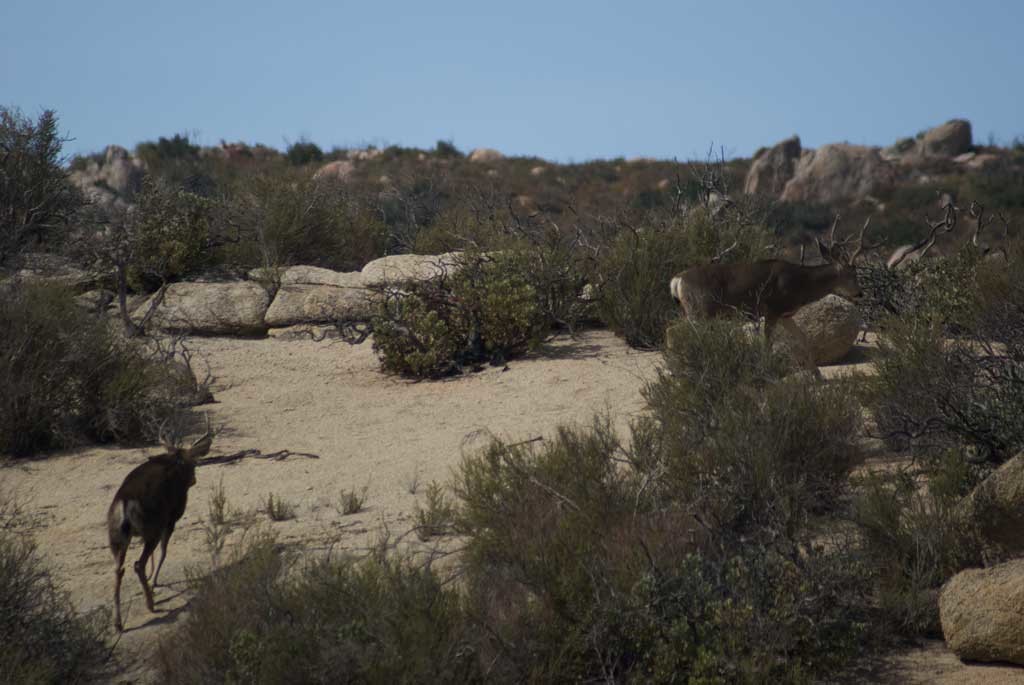 Two rutting bucks cruise the hills looking for receptive does in the Cuyamaca Mountains.

The Most Used Mammal Book on my Shelf

Posted On June 2, 2015 ~ 2 Comments
I'm a bit of a junkie for good field guides and people often ask about my favorites. I love my Peterson Guide to Mammals of…

Posted On July 13, 2015 ~ 0 Comments
The following guest post was written by my friend Preston Taylor. Preston is certified as a Senior Tracker and is very passionate about trailing, hunting, and…

Posted On January 19, 2015 ~ 2 Comments
Have you ever found a track and wished there was an easy way to share it with other trackers, naturalists, and wildlife biologists? Have you ever wished there…